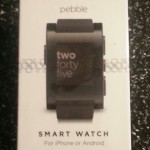 If you don’t already know about it, the Pebble Smart Watch, which received over 10 million in backing on Kickstarter, is simply amazing. I’ve had the watch for about 10+ days now and i’m definitely impressed and happy, but there are a few things I want to point out for anybody that may be interested.  Here’s my opinions and thoughts on this watch… 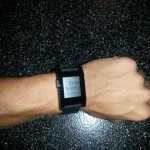 Getting a Pebble Watch

If you weren’t lucky enough to be on the few who backed the Kickstarter campaign, or you have pre-ordered through their website, getpebble.com, and haven’t gotten your yet…you may still be in luck. Unfortunately I wasn’t using Kickstarter as much as I do now when the Pebble came out, and ended up attempting to pre-order one through their website. About two weeks ago though I read a news article on The Verge (my favorite tech news source), stating that you could purchase a Pebble Watch directly through Best Buy. So that’s exactly what I did, that exact same same I went to the Best Buy website and express ordered one. I had the watch in hand that Friday, July 5th. So if you’re still on the pre-order list, I would just go ahead and order one from Best Buy unless you want a specific color. There was some gripe going around about Kickstarter backers not getting their watches yet, but what really happened was the colored watches were the ones being backordered. Everyone who contributed to Kickstarter for a black Pebble received them already, and the ones who ordered colors were given an option to go with the black one or wait. I couldn’t wait, I had to get one of these ASAP. 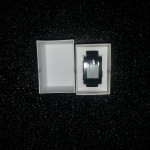 So once I received my Pebble and took it out of the box, my first impression was a lot better than I expected. The watch is a lot slimer profile than I thought it would be, and it looks like a nice watch that isn’t over bulky, even if you have skinny arms. That was my major fear, the watch being over bulky and looking out of place on my arm (as i’m one of those with skinny arms). To my suprise, it wasn’t! As you can see in the pictures I put a hat and lighter in there to give you some idea of the scale, which is in my opinion perfect in size!

Setting up the watch was a breeze, very easy to connect to Android phone, and I didn’t have any issues with it reconnecting whenever I came back within range of the phone either. Going through the settings is pretty simple, and options are fairly limited…but you don’t need much, and that’s what apps are for, to extend capabilities. 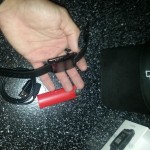 Being as though this watch is very new, there are only a handful of apps out there to use … i’m sure this will blossom into an entire app store eventually, but for now you can still get going with what is out there.

The first app you need to download besides the standard Pebble app, is Pebble Canvas, this app allows you to create custom watch faces and IMO is the best app out there right now. You can customize the included watch faces or create completely new ones yourself…I spent most of my Friday night creating different watch faces, which ended up being a lot of fun. The only issue I had with the Pebble Canvas was when you go to another watch face on the watch, or are out of range of your phone, it will either take a minute to bring the screen back up, or it will remain blank. Not a big deal, but something that could get annoying.

This is another must have for the pebble, called Pebble Glance. This app adds a lot of functionality to the watch, including pre-determined SMS replies, notifications, and more. I would have to say IMO right now Pebble Glance and Pebble Canvas are my two most used apps.

That weekend I decided to go golfing and give the advertised “Golf GPS” functionality a try. The unfortunate part about this is you have to use one specific application for Golf GPS, called FreeCaddie Golf GPS. I’m already an avid user of Swing by Swing as it tracks the clubs I use and distances, but for this round I decided to give FreeCaddie a try.

In my case the course I was going to was not already in their database, so I had to go on their website and manually map out the course. It was pretty easy to do, and took me about 30 minutes to an hour to set up the course. Using the GPS on the course was nice, it did work pretty well, and when comparing my watch to the GPS on the cart it was close enough for me, give or take 5 yards.

What I liked about the GPS was I could leave my phone on the cart and watch would still display GPS, but unfortunately it would just sit on the GPS. If you wanted to go back to the watchface you couldn’t, and if you close the GPS app, or open another app on your phone, the GPS would dissapear from your watch. I know it’s still new, and because of that I will probably use it again, but the the app still needs a lot of work, and it would be great to see Swing by Swing support Pebble as they already have a developed and supported app that has great functionality.

Being an casual surfer, I loved that I found this app to give me tide updates on my watch, but it still needs some work. With Pebble Tides you have to open the app and tell it to give you the info, and it does work, both off GPS and location input. Functionality needs to be added to say alert a couple hours before, or so, which would make it a lot more useful. Haven’t had the chance to go out with the watch on a surf session, but i don’t think the watch would be able to connect to the phone sitting on the beach. Great idea, but needs work. 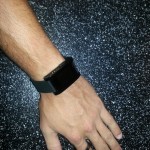 Another concern of mine was the battery life, and whether or not the watch could handle my daily life which includes being in or around water constantly. To my suprise the battery life was actually very good, after receiving the watch I let it sit on the charger for about 30 minutes, and then couldn’t wait any longer. With a 30 minute charge right out of box, the watch lasted until Thursday 7/11/2013 which was around 6-7 days total, with the first 3 days being heavy usage.

The power cord is nice, and it has that type of magnetic charger similar to what you would find on a Macbook. Only problem I see with this is it being a proprietary charger, and if you lose it, or don’t have an extra, you could be SOL until you order a new one or find yours. It would be nice to have some type of micro-usb connection on the watch, but i’m not too picky at this point. Couldn’t find any way to see what battery level is for the watch, which I think is a big negative, but hopefully soon that will be added.

For the sake of daily usage, the watch works perfectly when used around water. I’ve taken plenty of showers, gone swimming in my pool, even jumping off the diving board, and haven’t had any problems with the watch.

One great thing about the Pebble Watch is the SDK. With the SDK you can create your own Pebble apps, the possibilities are endless. With plety of API Guides and documentation it’s pretty easy to get started on your own apps or even just playing around with the watch.

Overall, I am very happy with the Pebble Watch. I know a lot of people were skeptical about it, and maybe even went for the Sony color watch, but I am very happy with the Pebble and can’t wait to see what new features they start adding or even the next generation! Having a color watch would be nice, but really, it’s not necessary. Especially with the cost, battery, etc, the Pebble has to be my favorite so far. I did see a few articles start coming out about Apple and a few others making their own smart watches, but Pebble starting through Kickstarter, having the SDK, and supporting a smaller company like this … i’m very satisfied.