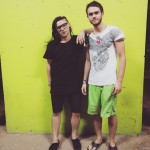 Skrillex recently posted a tweet “Who can make something dope out of this green screen http://instagram.com/p/xc4rWpSaEj/ ” … I just happened to see it and decided I would take a shot at it.  The original image was very low resolution, probably the worst green screen you could imagine, Zedd is wearing green shorts, lighting is off and casting shadows, Skrillex is wearing all black and it blends with the shadows …. the list goes on.

Who can make something dope out of this green screen http://t.co/NfAertezl5

Regardless I did come up with something and figured it would be best to release to others so they can come up with their own ideas and not have to worry about knowing Photoshop or being able to get the first part done which was simply extracting only Skrillex and Zedd.

These files are nowhere near perfect as I wasn’t going to spend hours on the image trying to get it perfect, but it’s better than nothing 😉

So download the PSD or just the transparent PNG and start playing around with ideas!

Don’t forget to reply to the tweet with any ideas you come up with!

Here’s some of the pictures I came up with:

@Skrillex @Zedd Actually might have been somewhere in Dreamville at someone's campsite 😛 #tomorrowworld #dreamville pic.twitter.com/HH7LqcBveJ

@Skrillex @Zedd I do know I saw you both at TomorrowWorld 2014, just not walkin' on water … I don't think .. hmm pic.twitter.com/Y9TZRgaCzK

@Skrillex @Zedd Or that you've been to outerspace pic.twitter.com/BCXNdvn5Wr