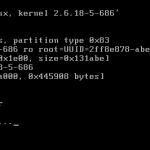 Recently when attempting to boot an old debian linux distro off a USB flash drive using VMWare’s Workstation, I kept receiving an error saying “Error 29: Disk write error” … “Press any key to continue…” which was an endless boot loop that threw me off for a minute.  I’m sure I tried restarting about 5 times until I realized it was a very simple fix…

The problem I was having turned out being that I had to use Plop Boot Manager to get the virtual machine to boot off the USB, and GRUB was attempting to use the “savedefault” command to write to the file
/boot/grub/default
which stores the last operating system that was booted. 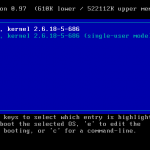 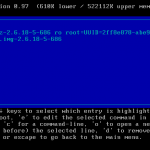 So, easy fix for this is to get back to the main GRUB boot menu, should look something like the screenshot “GRUB Edit Menu”.  From this screen we can edit GRUB and remove the savedefault option so we can boot off the USB drive.

From GRUB boot menu, hit the e key (for edit)

Use the arrow keys to scroll down and highlight savedefault.

Once you’ve highlighted savedefault, hit the d key (for delete)

After you have removed that command, simply hit the b key (for boot)