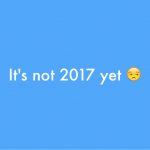 As you can probably tell from the title of this blog post … i’m ready for 2016 to be over.  This year has definitely been a difficult year for me, and i’m hoping that 2017 changes some of that.

The start of 2016 wasn’t good for me at all, as it began with one of my grandfather’s passing away.  It was difficult but as we all know, we eventually have to move on.  Thankfully a few months later things started looking better for me, I went on a cruise with my girlfriend of 9 years, we had a great time without any issues, one of my favorite DJ’s (Illenium) played a military charity event near me at UCF, which was his first time in Florida, and was amazing … after that, things started to go down hill again … and continued up until now. 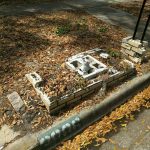 To start off the fun, some idiot who wasn’t paying attention while driving, completely destroyed my brick mailbox, and go figure … the insurance information I got from him … was completely fake … I even helped that asshole to get a spare tire on his car

So that was fun having to spend a ton of time removing all the broken bricks, installing a new mailbox, and then having the city come down on me to have to completely remove the entire foundation otherwise be charged $2,000 for them to do it.

That didn’t bother me too much, as that’s just life and i’m sure karma will come back around to that person.  You would think things may get better, but they didn’t … for about an entire month the power company was having problems, which resulted in us losing power almost every other day, for anywhere from a couple hours, up to 12 hours.  To make matters even worse, when the power company wasn’t having issue … my ISP started having problems … “maintenance” they called it, which is just BS because they don’t want to pay overtime for their employees to do maintenance NOT during normal business hours.  Of course that made it very fun for me to try and work .. ended up spending a lot of time at coffee shops just trying to get some work done.

Then the completely unexpected happened … Orlando was the scene of America’s deadliest shooting to date.  This was very hard on me, and I actually created a blog post describing how I had to use that anger and hatred, in a proactive way:

This really hit home for me and there was a good couple weeks where I couldn’t do much of any work, and actually had to go see a psychiatrist just to talk about it with someone, who I could open up to and express what I was feeling. I’m so thankful that I did do this, and did go talk to someone, because it helped tremendously.

If you’re on the fence about talking to someone because you think you may need help … don’t be ashamed of it, do it, in the long run you will be very happy that you did.

About a month later after all of this happened … there was a lot of drama between a few of my friend, in particular one of my best friends, or someone who I thought was a best friend, all over a girl.  She was completely anti-social, didn’t make any effort to introduce herself, and was very off putting to say the least.  At first I thought maybe she’s just a quiet person and I shouldn’t judge her without knowing … but the one thing I do know, is that my friend has a huge heart … and unfortunately I’ve seen people take advantage of that, and I didn’t want it to happen again.  A little bit of time goes by, and come to find out … she’s not only been cheating on him, but also completely using him in any way possible.  And it wasn’t like this was just 1 other person who told me this … literally everybody who knows either him or her, was saying this.  I tried talking to him, multiple times …. even broke down crying about it …. and in the end, he didn’t want to hear what any of us had to say … and unfortunately now, I no longer talk to someone I thought was one of my best friends 🙁

During this entire drama filled period of time … something even more horrible happened, which made me have to step back and look at what was important to me in life.  I received a phone call that one of my family members had been raped and shot, and was in the hospital.  At that point I no longer had time to deal with stupid girlfriend drama, and needed to focus on family and what was really important to me.  After multiple surgeries and being in the hospital for over a week, the family member was able to make a full recovery which in the grand scheme of things … I take as a good thing, as it could have been way worse than that.

Things seem to be going OKAY again, and then my last remaining blood grandpa, passed away.  This was very difficult for me as I had always looked up to him as a child, and an adult.  He was a professional engineer that worked at Lockheed Martin for almost his entire life.  He inspired me to become the engineer that I am today, and to question things .. build things … to never take “it can’t be done” as an answer.

Right after that happens, weather reports start coming in about the hurricane that’s going to hit Florida.  Yay, more fun.  I have family that lives in Melbourne Beach, and here in Orlando, so after helping all of them prepare and get ready, I then had to come back to my own house and get prepared.  Literally a week of just boarding up windows, buying supplies, helping move things around, and then the hurricane hits …. and all we get is a little bit of flooding.  I’m not saying I wish it had hit harder, because I don’t, but in the end I guess it’s better safe … than sorry … but that now just adds another week or two of time I was unable to work because I was so busy.

So after all this, i’m very backed up on work that I need to complete.  Tons of bug reports have come in for some of my plugins, and now I was completely swamped with work and things that needed to be finished.

You can read more about the business aspects of this in this separate blog post:

In loving memory of my daughter, Maggy